Enjoy the holiday of a lifetime with our African Safari tours, ideal for adventure seekers and wildlife fanatics. Enjoy the full safari experience in the Chobe National Park, Amboseli National Park and the Masai Mara Game reserve and visit the dramatic Victoria Falls which forms a border between Zimbabwe and Zambia. 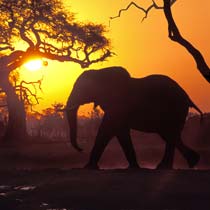 ​South Africa is a country boasting exceptional highlights – which you can begin to discover from the comfort of your beach hotel. The chance to spot thrilling wildlife on safari and visit a local community are included in your holiday.

Imagine sitting on a wooden deck, watching herds of wildebeest and buffalo drinking from a pool before you as the sky changes with the setting sun. It’s the perfect way to end a day of thrilling safaris - travelling in small 4WD vehicles through Kenya’s best wildlife reserves - Maasai Mara, Tsavo, and Amboseli, synonymous with glorious views of Mount Kilimanjaro.

Embark on a journey to the enchanting home of the African safari, fiery savannah sunsets and the colourfully clad Maasai - an epic adventure through Kenya's iconic wilderness.

Victoria Falls, arguably Africa’s greatest natural wonder, with often overlooked Botswana and incredible Cape Town, what a tour! There is something almost haunting about Africa and everyone should visit it at least once during their lives.

For the classic romance of an African safari, there’s scarcely a more perfect country than Kenya. From your room at the historic Treetops Lodge, you can watch elephants and rhinos drink from a watering hole.

This introductory tour to Kenya's most beautiful and varied wildlife areas begins on the slopes of Mount Kenya National Park, one of the world's highest national parks. Continue to the Ol Pejeta Conservancy with its 'Big Five' wildlife; Lake Elmenteita, where thousands of birds congregate; and the Masai Mara, where you will stay at Mara Serena Safari Lodge, a ringside seat to the annual wildebeest migration between July and October.

The only African country that has never been colonised, Ethiopia is also unusual for its rich Orthodox Christian heritage, which was maintained even when all its neighbours embraced Islam in the seventh century. This journey travels through this enthralling and beautiful country, little explored by tourists, and discovers the layers of history that have shaped the land.

In places starkly beautiful, in places packed with colourful life, Namibia is always ruled by Mother Nature. On this tour you’ll traverse the ever-changing ‘dune sea’ of the Namib desert.

This fascinating tour takes in the historic sites of the capital Khartoum before heading into the desert in search of the remote Unesco-listed sites of Meroe, Jebel Barkal, El Kurru, Naga and Mussawarat. The quality of the archaeological sites rival Egypt’s, and give a unique insight into Nubia’s lost civilisations and evidence of their influence throughout eastern Africa over thousands of years.

Explore one of Africa's most beautiful nations on our Ethiopian Discovery Tour. Travel to historic cities and stunning natural landmarks while enjoying unique cultural excursions to some of the friendliest communities on the continent.

Africa offers some of the best wildlife viewing in the world including the famous Big Five, all of which can be seen on safari. Safari means ‘journey’ in Swahili, and the concept originated in Kenya. It is here that you’ll witness two million wildebeest on their annual migration into the Masai Mara, believed to be visible from space. The indigenous Masai and Samburu tribes give an intriguing insight into traditional African culture and rituals, allowing you to truly immerse yourself in this fascinating country. The coast with its stunning beaches is the perfect place to relax after a thrilling few days on safari.

Approximately 40% of Botswana is dedicated to national parks and game reserves, all of which are without fences. Wildlife is able to roam freely meaning unsurpassed opportunities for game viewing. Exploring the Okavango delta by canoe is a once-in-a-lifetime experience, while a walk with Bushmen in the Kalahari Game Reserve is the perfect chance to embrace the local traditions.

Rwanda, nicknamed the ‘Land of a Thousand Hills’, is renowned for its mountain gorillas, but it has a lot more to offer, including soaring volcanoes and tranquil lakes. Meanwhile, Tanzania is a photographer’s dream, from snowcapped Mount Kilimanjaro, Africa’s highest mountain, to the vast plains of the Serengeti, and the breathtaking Ngorongoro Crater. A volcano collapsed around two million years ago creating this extraordinary volcanic landscape, home to black rhinos and hippos, to name but a few.

Victoria Falls is simply breathtaking and forms the border between Zimbabwe and Zambia. In the 1800s, the Kololo tribe described this dramatic waterfall as ‘The Smoke that Thunders’. Heading south, you’ll find Johannesburg, a former gold-mining settlement which has grown into South Africa’s biggest city.

Nelson Mandela’s former home has been turned into the Mandela House museum, while the Apartheid Museum is a poignant reminder of the apartheid system which existed until the 1990s. At the southern tip of South Africa is Cape Town, a diverse city crowned by the majestic Table Mountain. From pristine white beaches to dense forests with abundant hiking trails, and interesting art galleries, there is definitely something for everyone.