Our fantastic collection of New Zealand tours offers the choice to explore the North Island including Auckland, Rotorua and Wellington, or the magnificent South Island with highlights such as Christchurch, Dunedin and Queenstown. Some of the New Zealand tours also give the opportunity to combine the contrasts of both islands in one trip. 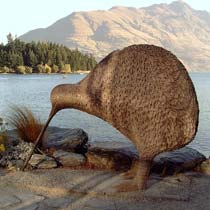 Start your New Zealand journey in Auckland and venture through the lush landscapes of Rotorua and Queenstown. From the sensational alpine landscape of Lake Tekapo and Mt.Cook National Park, to the extraordinary geysers of Rotorua and the dramatic underground caverns of the Waitomo Caves, there is no shortage of spectacular sights to take your breath away.

Venture through the North Island from Auckland to New Zealand’s capital, Wellington and revel in New Zealand most iconic sights. Enjoy a local connection with an exclusive By My Guest lunch on a private Waikato dairy farm. Learn insider knowledge from your experienced Travel Directors and immerse yourself in the Maori culture as you are invited for the evening at Tamaki Maori Village to experience the centuries-old traditions of New Zealand's Indigenous.

Bubbling mud pools and Māori culture define this memorable encounter with New Zealand's north. Explore Auckland, Rotorua and Wellington, with a stop for lunch with a retired champion jockey.

Discover the beauty of Australia and New Zealand on a journey that takes you across vibrant, diverse landscapes and picture-perfect scenery, as well as iconic sights from Auckland to Cairns.

A plethora of natural wonders and iconic landscapes await when you embark on a journey through New Zealand’s South Island. Join a local expert as they share with you the wonder of Tasman Glacier, New Zealand’s longest glacier, before embarking on a scenic journey through the forests, flats and meadows of Fiordland National Park and out to the unmissable Milford Sound. Indulge in the culinary and cultural delights of the South as you enjoy a Be My Guest lunch at Morelea.

Discover the sights of New Zealand in this epic 17 Day Guided Holiday and experience the contrasts of both the North and South Islands. Enjoy a local connection in picturesque Hinuera Valley, journey through farmland to the turquoise torrent known as Huka Falls and immerse yourself in New Zealand’s Maori culture at Tamaki Maori Village.

Experience a perfect New Zealand holiday that will leave you with a lifetime of golden memories. In the North Island, it may be the spirit and energy of a Māori cultural performance, or the thermal wonderland of Rotorua. In the South Island, be blown away by the breathtaking beauty of its snow-capped mountain ranges and the fiords and waterfalls of Milford Sound. Whatever your delight, there are many memories to take away and treasure.

Includes flights from the UK. Join Travelmarvel for 20 days exploring the highlights of New Zealand. Highlights include the Bay of Islands, the geothermal geysers and Maori culture of Rotorua and the snow capped Southern Alps of the South Island.

The North Island is subtropical with a glorious coastline, stunning beaches and the cosmopolitan cities of Auckland and Wellington. Visit a geothermal wonderland with bubbling sulphur pools and erupting geysers at Wai-O-Tapu in the Rotorua region, marvel at the dolphins and whales as you sail along the coast off the Bay of Islands and witness the awe-inspiring natural scenery at the Tongariro National Park.

The South Island is home to wonderful wildlife, gourmet food, delightful wines and the charming lakeside town of Queenstown and Wanaka. Walk through dramatic ice caves in the glacier region, visit the Lord of the Rings country in Queenstown and observe the fascinating wildlife in the Milford Sound.

The Māori culture is the heart of New Zealand and has firmly imprinted itself on the modern Kiwi life. Wherever you are in New Zealand, you can hear the Māori language, enjoy a Māori feast known as a hāngi and experience a cultural and historical Māori performance with song, dance and the famous Haka war dance. The New Zealand All Blacks are renowned for their performance of a traditional Maori haka before each game of rugby.

New Zealand boasts a laid back and welcoming atmosphere and is a true pleasure to explore. The transport systems are exceptional, the destination choices are endless and the food is delicious. The cities including Auckland, Wellington and Napier take influences from as far afield as South Pacific islands and Western Europe to create inspirational dishes using locally sourced food. The vegetarian/vegan scene is one of the best in the world and you are never too far from a cup of perfectly-brewed coffee.