Our superb collection of Italy tours visit this unique country's historical cities, dramatic coastlines, architectural wonders and sample world-renowned gastronomic delights. Take a tour of Tuscany and discover the delights of Florence, Pisa and Siena, experience the beauty of the Italian Lakes, or explore the Bay of Naples and Amalfi Coast with highlights including ancient Pompeii and cliff-top Sorrento. Off the beaten track tours take you to rustic Calabria or crowd-free Puglia. 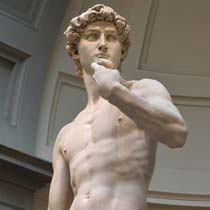 Few places in Italy remain undiscovered, but the tiny region of Friuli Venezia Giulia – known simply as Friuli – is a treasure trove of historic and artistic gems. You may find your first visit surprising, as there’s so much to explore and it’s so easy to fall under the spell of this unspoilt landscape.

Uncover the unseen gems of the breathtaking Veneto and beyond: astonishing architecture, cities steeped in history with deep cultural connections, and some of Italy’s best wines.

Italy presents a great diversity of people; of food and wines; iconic architecture; footprints of ancient and medieval civilisations and a huge variety of scenery ranging from almost desert to lofty mountains. There is no one thing or region that defines Italy but in the north, its lakes reflect the magnificent Alps, so high they appear to puncture the sky!

The Sorrento peninsula and the Bay of Naples is simply one of the most beautiful corners of Europe, attracting visitors for centuries in search of its outstanding scenery, tranquillity and some of the most wondrous ‘sights’ from throughout history. Indeed in the immediate area we have a selection of places to see and visit which stand comparison with almost anywhere in the world.

For centuries Italy has drawn visitors in search of culture and romance with few countries comparing with its enormous Classical origins: its art, architecture, music, design, scenery, food or wine. Its contribution to art far surpasses that of any other nation being home to the most extensive ancient civilisation, the Renaissance, the Roman Catholic Church and the Vatican.

Just as our desire to explore and experience new lands is timeless, so too is the beauty of the Italian Lakes, unfailingly delighting visitors for centuries. Indeed it was the influx of the pioneering British during the days of the Grand Tour, who first brought fame to the majestic Lake Maggiore and helped to create the sophisticated lakeside villages, nestling like pearls on a string, along its picturesque, verbena-clad shores.

Italy’s artistic contribution surpasses that of any other nation, whilst Tuscany’s bucolic scenery is home to more historical monuments than any other entire country on earth. For centuries Italy has attracted visitors in search of culture and romance and there are few countries that can rival its renowned Classical origins, its art, music, architecture, scenery, food and wine.

Puglia, little-known, ruggedly beautiful, fringed by the sea – where the magnificent architecture of Lecce and Bari, coastal charm of Vieste, ‘hobbit’-like conical trulli and local cuisine offer a delightfully different experience of Italy.

From the Alpine peaks of the north to the stunning coastlines of the south and beautiful vineyards in between, Italy tours are the perfect way to discover this mesmerising country. Highlights of northern Italy tours include the stunning Liguria region on the Italian Riviera which takes in the colourful fishing villages of Cinque Terre and stylish Portofino, while the picture-postcard Amalfi Coast is one of southern Italy’s most iconic destinations.

Italy is a country where culture and art go hand in hand. After the fall of the Roman empire, the Renaissance was considered a rebirth of civilisation throughout Europe. The artists and architects who were influential in the Renaissance were all born in and around the city of Florence, including Michelangelo and Leonardo da Vinci. This remarkable city is home to Michelangelo’s David and Botticelli’s Birth of Venus, plus many more. Not far away is the city of Pisa in Tuscany, renowned for its iconic Leaning Tower.

Rome, nicknamed ‘the eternal city’, was once at the centre of the Roman Empire as well as western civilisation. Its incredible monuments express the power of former emperors, from Augustus to Constantine. The Colosseum was once aroar with the noise of gladiators, and the magnificent Roman Forum was considered the heart of the Roman Empire. The ornate Sistine Chapel is best known for its breathtaking ceiling, painted by Michelangelo, with frames including scenes from the Old Testament.

As well as powerful cities and archaeological treasures, Italy offers outstanding scenery and natural beauty. Lake Maggiore, just south of the Alps, and captivating Lake Garda, are just two of the lakes which make up the popular Italian Lakes. It is impossible not to be seduced by these stunning lakes, as the shorelines are dotted with pretty villages and exquisite villas. The beautiful island of Sicily at the crossroads of the western world is equally as beautiful, and overlooked by the brooding Mount Etna. Tranquil azure waters lap against secluded bays, all set against a backdrop of striking blue sky.