Jordan tours explore a land of contrasts, from captivating cities bursting with archaeological treasures, to breathtaking natural wonders. The incredible UNESCO-listed “Rose-Red City” of Petra is a sight to behold, while the vast Wadi Rum desert has majestic rock formations including the Seven Pillars of Wisdom, featured in the film, “Lawrence of Arabia”. 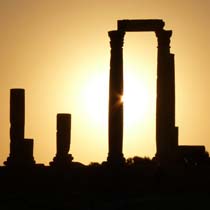 Jordan is a remarkable country, with extraordinary landscapes of red-hued dunes and windswept sandstone, and world-class monuments that include Roman amphitheatres and Crusader castles. From Moses to Alexander the Great, Saladin and our own Lawrence of Arabia, all have left outstanding legacies.

Welcome to a land rich in Arab culture, natural wonders and sites so ancient that by comparison, the Crusader forts guarding the old trade routes are considered recent additions.

Epic desert landscapes, astounding monuments and the wonderfully restorative Dead Sea make the tiny kingdom of Jordan truly rewarding to explore. On this tour we walk the streets of spectacular Petra, an ancient rock-hewn city rediscovered beneath the sand in 1812.

This tour picks out the best of Jordan’s magnificent cultural heritage and stunning landscapes. Visit the classical city of Jerash, the biblical site of Mount Nebo and Petra, the rock-hewn city. The shifting sands of Wadi Rum and the curative waters of the Dead Sea complete your exploration.

Jordan is a remarkable country, with extraordinary landscapes of red-hued dunes and windswept sandstone, and world-class monuments that include Roman amphitheatres and Crusader castles. From Moses to Alexander the Great, Saladin and our own Lawrence of Arabia, all have left outstanding legacies.

​Discover Jordan's gleaming treasures as you journey to biblical sites, the 'lost city' of Petra and through magical desert landscapes.

Land of the Gods

A biblical encounter awaits on this epic journey that will see you visit the Old City of Jerusalem, Bethlehem's Church of the Nativity and the "Rose Red" city of Petra.

Best of Israel and Jordan

From the Wailing Wall to the rose-red façades of Petra, this historical interlude with Israel and Jordan will see you visit the tomb of King David, the Mount of Beatitudes and the Dead Sea, before following in the footsteps of spice traders across desert landscapes.

The Highlights of the Kingdom of Jordan

Go in search of antiquity and the origins of faith as you travel through this remarkable country, from the ancient Roman city of Jerash to Bethany Beyond the Jordan, the site where Jesus was baptized.

Without question, Jordan is steeped in history, with its remarkable cities and revered biblical sites. Moses is said to have guided his people through the arid Jordanian deserts, while Alexander the Great led the way for Hellenistic cities. The Natabeans used the vivid red Petra sandstone to create architectural masterpieces, and the Romans established Jordan as an important trading centre.

The UNESCO-listed city of Petra, named one of the new Seven Wonders of the World, is undoubtedly the jewels in Jordan’s crown. A narrow gorge known as the Siq offers the first glimpse of this red sandstone city, home to the spectacular Treasury, dating back to the 5th century BC, and incredible Roman Ampitheatre, which once held 3000 spectators. Jordan’s capital, Amman, is overlooked by an impressive Citadel, and just a stone’s throw away is the well-preserved Greco-Roman city of Jerash, nicknamed the “Pompeii of the East”.

The cities provide a stark contrast to the natural treasures that Jordan has to offer. Dramatic sandstone and granite formations emerge from the shifting sands of Wadi Rum, a magnificent desert landscape.

The beautiful Dana Nature reserve is home to an abundance of wildlife and the sheer sandstone cliffs of Wadi Dana which lead to the Dead Sea, the lowest point on earth. This salt lake is a tourist hotspot and its mineral-rich mud is used for therapeutic purposes. From here, you can look across to Mount Nebo, one of the most revered sites in Jordan, as it is where Moses stood and looked over the Promised Land.