Eastern Europe tours cover this vast region made up of many contrasting countries, each with their own proud history and story to tell. Visit Bulgaria in the heart of the breathtaking Balkans, Hungary with its intriguing capital of Budapest, the medieval cities of Poland, and the densely forested mountains and folklore of Romania. 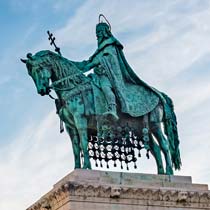 These stunning cities of the east reveal their medieval charm, among the sparkle of twinkling lights and the magic of Christmas.

Melodies of the Danube

This cruise along the Danube ticks all the boxes for scenic beauty and enchanting cityscapes. A classical treasure trove of history and the arts, we’ll stop in opulent Vienna - with the option of a live classical concert.

Immerse yourself in the magic of the Christmas season on this tour of Austria, Slovenia, Croatia and Hungary's most festive attractions. Starting in enchanting Vienna and finishing in cheerful Budapest, this seasonal adventure is filled with music, natural wonders, delicious foods and bustling markets - making it the ideal winter break for those seeking a taste of traditional Central Europe.

The Crossroads of Europe and Asia

Our eye-opening tour of the highlights of Georgia explores the fascinating current and ancient capitals of Tbilisi and Mtskheta, dramatic mountain scenery along the renowned Georgian Military Road, ancient citadels and churches in breathtaking locations, the unbelievable cave-city of Vardzia, the fruitful Kakheti wine region where ancient techniques are still used with modern methods, and so much more.

Majesty of the Danube

Vienna. Bratislava. Budapest. The stops on this enchanting cruise read like a list of Hollywood stars. And on this trip, they are the stars.

Balkans off the Beaten Track

Unlock the beauty of the Balkans as you make your way through the dramatic landscapes and culture-rich communities of Albania and Macedonia. Relatively undiscovered by UK visitors, you’ll be veering off the well-worn tourist trail - and your reward will be spectacular national parks, World Heritage Sites and centuries-old mosques, churches and monasteries.

Poland reverently respects its history while marching forward in hope. Exploring its spiritual side, we head to the ‘Jasna Góra’ (Bright Hill) Monastery in Częstochowa, a hugely prominent place of pilgrimage.

Immerse yourself in the magic of Austria, Slovenia, Croatia and Hungary’s most historic attractions and mesmerising landscapes. Starting in enchanting Vienna and finishing in cheerful Budapest, this multi-country adventure is filled with music, natural wonders, delicious foods and bustling markets – making it the ideal holiday for those seeking a taste of traditional Central Europe.

​This trio of Eastern European capitals all have their own unique charms. Discover them as you stroll Prague's medieval streets, admire Vienna's opulent architecture set against a backdrop of alpine scenery and explore Budapest's impressive sites.

Prague and the Majesty of the Danube

Prague. Vienna. Bratislava. Budapest. The stops on this enchanting cruise read like a list of Hollywood stars.

Tours to Eastern Europe showcase the history, culture and outstanding natural beauty of this diverse region, with fascinating guided excursions designed to enrich each holiday.

History lovers will enjoy delving into the region's fascinating past. Over the centuries, many empires have ruled Bulgaria, including the Romans and the Ottomans. The country initially struggled following the fall of the Communist regime, but today it is fast becoming one of Eastern Europe's most popular tourist destinations. Bulgaria offers an intriguing mix of architectural styles, from the stunning neo-Renaissance National Assembly Building in the capital of Sofia, to the impressive Roman amphitheatre in Serdica, discovered in 2004.

Without a doubt Budapest's waterfront is iconic, with the spectacular Hungarian Parliament taking centre stage. Just a stone's throw from the Danube river is Buda, home to the ornate Fisherman's Bastion and grand Buda Castle.

The Romanian capital of Bucharest, founded by Vlad the Impaler, is also renowned for its architecture, including the neo-classical Opera House and Romanian Orthodox Church of St Stavropoleos. Another stunning capital is Prague, which straddles the Vltava river. The medieval centre is a maze of cobbled lanes and ancient courtyards, and there are five historical districts linked by the landmark Charles Bridge.

Known as the 'Cradle of the Balkans', Albania and Macedonia offer incredible UNESCO-listed sites and well-preserved churches. Located on the shores of picturesque Lake Ohrid, the UNESCO-listed city of Ohrid has an array of beautiful churches including the Church of St. Sophia, while UNESCO-listed Butrint in southern Albania is renowned for its impressive Roman ruins.

Moldova, sandwiched between Romania and the Ukraine, is a hidden gem bursting with architectural treasures. The capital, Chisinau has an impressive Triumphal Arch commemorating Russia's victory over the Ottoman Empire during the 19th century. Further south is the republic of Transnistria which has retained a strong Soviet character.

Novi Sad straddles the legendary River Danube and is Serbia's second largest city. It is a treasure trove, with the magnificent Petrovaradin Fortress dominating the skyline and the historic Stari Grand offering a plethora of museums. The diverse capital of Bratislava also has interesting museums, including the Slovak National Museum, with exhibits documenting Slovakia's interesting past.

The Silk Road was an ancient network of trade routes connecting the East with the West. It passed through Armenia, a country with a turbulent past, and Azerbaijan, a fusion of cultures as a result of being frequented by traders and travellers. Its capital, exotic Baku, has a charming 10th-century UNESCO-listed Old City with narrow alleyways and caravanserais.

Eastern Europe is renowned for its architecturally-rich cities, but it also has stunning mountain ranges and an array of hiking trails, just waiting to be explored. Northern Bulgaria is dominated by the flat Danube Valley, with the south being occupied by highlands and plains. The Balkan Mountains cut through the centre of this intriguing country and offer avid hikers endless walking opportunities. The beaches along the Black Sea coast are perfect for a gentle stroll and the ski resorts cater for adrenaline-fuelled holidays.

Georgia is one of the world's oldest Christian nations and boasts rolling green valleys, vast vineyards and incredible natural wonders. Martvili Canyon in the Samegrelo region has stunning cascading waterfalls and was once a bathing spot for the Dadiani aristocracy.

Slovakia is just a stone's throw from the beautiful Small Carpathians mountain range, perfect for a ramble, while a climb up Sighisoara's Clock Tower in Romania promises spectacular panoramic views, but it's not for the faint hearted! Last but not least is Poland. From rugged mountains to the sandy beaches on the Baltic coast, and the stunning wilderness of the Bialowieza National Park, the country is perfect for outdoor pursuits.

In addition to a rich history, myriad of architectural styles, and stunning scenery, Eastern Europe has been the inspiration for greats works of literature. North of the Romanian capital of Bucharest, high in the breathtaking mountains, is the famous Bran Castle, known as Dracula's Castle. Its striking orange spires emerge from verdant forest. It has long been associated with Dracula as it is the only castle in Transylvania which fits Bram Stoker's description of Dracula's Castle.