Escorted tours are the best way to explore eastern Canada's French and British heritage or the wilderness of western Canada. Eastern Canada tours include Montreal, Quebec and dramatic Niagara Falls whilst the west is home to the magnificent Rocky Mountains and scenic National Parks. 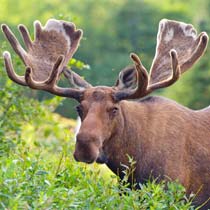 Explore Canada's cosmopolitan cities, French and British heritage and majestic natural landscapes, from the cascading waters of Niagara Falls to the pretty meadows, rolling hills and farms of Eastern Townships in Quebéc.

Enjoy the taste of the salty Atlantic, fresh lobster and the foot-stomping Celtic culture as you explore wind-swept sea cliffs, centuries-old towns and the hearty way of life of the Nova Scotians along with Prince Edward Island and New Brunswick.

Your exhilarating encounter with western Canada will have you breakfasting in floral splendour, riding on glaciers and meeting a retired Mountie on your journey into the heart of the Rockies.

Discover 3 fascinating cities and 1 world wonder on a captivating 10-day holiday around North America. From the powerhouse of Washington D.C., we travel by rail to chic New York, absorb the beauty of Niagara Falls from its Canadian side, and explore bustling Toronto.

Join in the revelry of The World's Richest Tournament Style Rodeo.

Experience the magnificent Rocky Mountains, travel along the ‘road of steel’ and finally arrive at Vancouver as one of the most naturally beautiful cities. The Canadian Rockies must surely rank amongst the very finest of scenic and wildlife holidays on earth.

Colours of the Canadian Fall

Ontario is a medley of spirited cities and intensely dramatic natural landscapes - and there are few better times to experience it than in the autumn. Absorb the Gothic grandeur of Ottawa and the diversity of Toronto, before escaping the cities and taking a deep breath of crisp, fresh air in the countryside.

Highlights of the Rockies

Experience the highlights of the Canadian Rockies including Whistler, Banff, Jasper and Vancouver, with the option to embark on a memorable VIA Rail journey from Jasper to Vancouver

Calgary Stampede and the Rockies

A seamless mix of dynamic, modern and good ol’ fashioned western fun, Calgary is quintessential Canada. But all bets are off each summer when this sophisticated metropolis plays host to boisterous rip-roaring rodeo in the ‘Greatest Outdoor Show on Earth’, the Calgary Stampede. After witnessing the festivities, trade in your cowboy boots for walking boots as you trek through some of the most incredible scenery Canada has to offer in Banff, Jasper and the Rockies.

Canada’s natural beauty stretches from coast to coast. The snow-capped peaks of the magnificent Rocky Mountains are often visited on a Canada tour and are the country’s crowning glory; a trip on the luxurious Rocky Mountaineer train is the ultimate way to travel through the high passes, deep ravines and spectacular bridges of Alberta and British Columbia.

The Icefields Parkway is one of the most stunning roads in the world with breathtaking mountain views and links the national parks of Banff, home to the ethereal beauty of Lake Louise, and Jasper with its natural hot springs, white-water rivers and alpine forests. On a Canada tour there is the chance to spot an amazing array of wildlife including huge moose and black bears in the national parks, and orcas on the western coast.

Vancouver enjoys one of the most beautiful settings of any city, located along the edge of the Pacific Ocean with a dramatic mountain backdrop. On the eastern coast of the country, Atlantic Canada encompasses New Brunswick, Newfoundland and Labrador, Nova Scotia and Prince Edward Island, with over 43,000km of rugged coastline. There are excellent whale-watching opportunities and millions of seabirds can be spotted along the coast including puffins and gannets, as well as the elusive polar bear.

The scenery of this region is striking with natural phenomena including iconic Hopewell Rocks, the impressive tidal range of the Bay of Fundy and the dramatic wilderness of Cape Breton Highlands National Park. Iceberg Alley, which links Newfoundland and Labrador, is one of the best places in the world for viewing immense icebergs as well as majestic humpback whales.

The province of Quebec has French as its official language and its culture is like no other, with a fascinating blend of First Nation, British and French heritage. The two main cities are cosmopolitan Montreal and 400-year-old walled Quebec City. Ontario is home to Ottawa, the country’s capital, the lively city of Toronto and majestic Lake Ontario. The natural wonder of Niagara Falls provides unforgettable views whilst winery tours to the Niagara wine region give the opportunity to taste ice wine, the local speciality.