Greece tours promise ancient cities, archaeological treasures and breath-taking islands scattered in the warm clear waters of the Ionian and Aegean Seas. The country has been the setting for legendary myths and tales, including Troy and the Battle of the Spartans. East of Greece is the beautiful island of Cyprus, birthplace of Greek goddess Aphrodite and one of the oldest civilisations in the Mediterranean. The island not only offers a rich history, but outstanding natural beauty and mouth-watering cuisine. 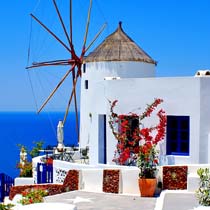 As the cradle of western civilization, of democracy, philosophy, the theatre, and so much more, Greece has drawn visitors for centuries. All have extolled the purity of its skies, the overwhelming hospitality rooted in its ancient civilization and the zest for life of the Greeks themselves.

Crete is one of the most beautiful, interesting and diverse Greek islands to explore. Stroll along the harbour - guarded by a Venetian fortress - of its capital, Heraklion.

To uncover a more traditional side to this popular island, explore its beautiful north with us. Staying in the historic harbour town of Kyrenia, we tour the island’s intriguing capital, Nicosia, and call in at Büyük Han, a large caravanserai (roadside inn) where Silk Road travellers used to stop by.

​Year-round sunshine lures many visitors to Cyprus but other highlights include picturesque landscapes, ancient ruins and medieval walled towns. Discover thousands of years of history and unwind as you enjoy the facilities at your 4-star hotel on this relaxing holiday.

Stunningly beautiful with a long and varied history, Corfu offers a perfect combination of fascinating sights and total relaxation. Join us as we explore Corfu Town’s highlights, including views of its imposing Venetian fortress.

This picturesque Greek island is home to lovely landscapes dotted with wildflowers, glorious beaches, traditional villages and ancient ruins. Explore on a range of guided walks and enjoy the comforts of a unique hotel built in the style of a Cretan village.

Explore Ancient Greece, from the Temples of Zeus and Hera to the Parthenon and Delphi. Walk the Sacred Way to the 4th-century Temple of Apollo and greet the gods and goddesses of Olympia.

Athens, Olympia and the Corinth Coast

Discover the highlights of Greece's capital, Athens, including the iconic Acropolis, and cross the famous Corinth Canal. You'll also visit Olympia, where the Olympic Games were first played in 776 BC, and explore ancient Delphi for a further fascinating glimpse into the past.

Compare and contrast the delights of Western Greece on a tour which takes in the idyllic island of Corfu, the mysterious mountain-top monasteries of Meteora and Zagori's traditional stone villages surrounded by nature trails and beautiful countryside.

Santorini is one of the most stunning Greek islands. Take in its beauty before relaxing in Paros and discovering idyllic Mykonos.​

Without question, the ancient Greeks played an important role in shaping the modern world, from philosophy to physics and mathematics. Alexander the Great shared their ideas and innovations with the East, while the Roman Empire ensured achievements were known by the West. The Greek capital of Athens is where you’ll find the UNESCO-listed Acropolis, perched high on a rocky outcrop overlooking the city, and the Parthenon, dedicated to the goddess Athena.

Delphi’s temple of Apollo, the incredible ancient theatre of Epidaurus, and the impressive citadel of Mycenae are also archaeological treasures. Olympia hosted the first Olympic Games in 776BC, held in honour of Zeus, King of the Gods, while the Palace of Knossos on Crete is believed to have held the legendary Minotaur.

Renowned for its delicious cuisine, Greece is dotted with traditional tavernas serving local delicacies accompanied by the famous Ouzo and Muscat wine. The country’s fertile fields produce large quantities of figs, olives and tomatoes, which are incorporated into iconic recipes. You’ll enjoy an authentic taste of the Mediterranean, from colourful salads to the classic Moussaka.

Greece is a magnet for those who appreciate the great outdoors, with golden beaches and crystal-clear waters teeming with fish, perfect for snorkelling. The verdant mountains, including Mount Olympus, offer endless walks, and each island has numerous trails so you can enjoy stunning views of the shimmering Aegean and Ionian Seas. Santorini is famous for its picture-postcard blue-domed churches and characteristic whitewashed buildings which cascade down the cliffside. Those seeking a more leisurely pace can browse the glamorous boutiques of fashionable Mykonos or simply shop for souvenirs in the many gift shops. At night, Mykonos comes alive with cocktail bars and Hora’s open-air cinema.

The island of Cyprus is more than just a beach destination. The breathtaking Troodos Mountains offer numerous hiking trails as well as renowned vineyards. The mild winter conditions are perfect for producing the celebrated Maratheftiko and Xynisteri wines. The island also boasts award-winning beaches and delicious cuisine, a fusion of Greek and Middle Eastern flavours, plus a host of archaeological treasures, including the undergrounds Tombs of Kings and the mosaics of Nea Paphos.