Portugal tours focus on the country's traditions, culinary heritage and dramatic scenery, with visits to stunningly-preserved medieval walled cities, ancient castles, steep terraced vineyards and the sun-kissed coastline. Visit the cosmopolitan capital of Lisbon, the picturesque Port-wine producing Douro Valley and the beautiful beaches of the Algarve. Just off the coast of Africa is the fascinating archipelago of the Azores, and the colourful island of Madeira. 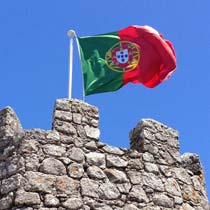 Madeira, the Pearl of the Atlantic

Madeira may be tiny, but this subtropical paradise offers world-renowned gardens, spectacular coastlines and jagged peaks, while picturesque Funchal boasts an architectural charm and rich maritime heritage to match the island’s natural splendour. Rising from the ocean floor 600 miles southwest of Lisbon, Madeira is a subtropical paradise that captures the hearts of all who visit.

You’ll discover the real Portugal on this tour – a rich and varied country with a proud history that’s admirably reflected in the many fascinating places we visit. Inland Portugal, long overlooked on European itineraries, has only recently been brought to the discerning traveller’s attention.

Madeira - Pearl of the Atlantic

If you like your holidays to feature strolls in gloriously colourful gardens, mood-lifting sunshine, panoramic mountain views, wonderful countryside walks and local wine and crafts, then Madeira really is a find. And this excellent-value tour lets you find it at your own pace.

Every spring, when Madeira’s magnificent flora is at its most resplendent, the island’s capital comes alive with the colours and scents of its beautiful flowers. Streets and shop windows are filled with decorations and people gather to enjoy the carnival of traditional music groups that accompany vivid parades in celebration of peace and hope.

Beyond Portugal’s exciting capital city lies a land of beautiful ancient towns, varied culture, wild landscapes and elegant pousadas (hotels). On this excellent-value tour, you’ll get to stand before the dazzling 110m marble façade of the Duke’s Palace, Vila Viçosa.

​Discover charming old towns, golden sands and tempting local delicacies on this wonderful holiday, which includes visits to bustling Oporto, historical Lisbon and Aveiro – the 'Venice of Portugal'. Taste port wine and traditional pastries, and delve into the diverse highlights that await in the Douro Valley, including a memorable cruise along the river.

Madeira - The Pearl of the Atlantic

​Madeira is a gem of a destination, affectionately known as the Pearl of the Atlantic. Discover the delightful capital Funchal and admire breathtaking scenery as you explore the mountains, valleys, villages and coasts that make up this delightful island.

Wander through medieval cities and visit the religious landmarks of Fátima, Batalha and the dramatic Hieronymite Monastery, enjoying a delicious Pastel de Belém or two along the way.

Beginning in Porto, this evocative journey from Portugal through northern Spain’s enchanting ancient towns and character-filled cities is one to be remembered. Join us as we follow our own pilgrimage of discovery along the Camino de Santiago and beyond – savouring tantilising flavours, uncovering centuries-old stories and venturing into breathtaking natural landscapes.

Delve beneath the surface of these two amazing countries. Sample their signature dishes, share in their culture and marvel the legacy of their rich sea-faring history.

Portugal is an ancient kingdom once defended by hilltop castles and dramatic fortified towns. The legacy of its former seafaring wealth and power can be seen in the magnificent architecture of its historic cities, whilst its ancient history can be uncovered in its mysterious megaliths and stone carvings.

There is a huge range of cultural diversity, from the cosmopolitan sophistication of Lisbon to rural villages where life seems unchanged for centuries. Fado is traditional folk music most popular in Lisbon and Coimbra, with expressive and melancholic lyrics, whilst contemporary Portuguese tastes are influenced by the sounds and styles of South America and Africa.

Portugal's scenery ranges from rolling vineyards to dramatic coastal scenery with pristine beaches. The River Douro winds through gorges terraced with vineyards to the ocean and the fascinating city of Porto, passing ornate palaces, places of pilgrimage and famous wine estates.

The granite peaks of the Parque Nacional da Peneda-Gerês are perfect for hiking, whilst the calm waters of the Algarve offer a laidback beach experience. Madeira, the floating garden in the Atlantic, is famous for its delightful botanical gardens, classic Portuguese white-washed houses, fine wine and fabulous scenery.

Portugal’s cuisine is as diverse as its landscape, with hearty dishes made from fresh ingredients influenced by spices obtained through trade routes centuries ago. The freshest seafood can be enjoyed along the coast, from traditional bacalao and caldeirada stew to Azores caviar, a unique delicacy in Portugal. Iconic comfort-food dishes include caldo verde soup cooked in a traditional clay pot, a substantial Portuguese stew and pastel de nata, the quintessential Portuguese custard tart. Of course, Portugal is world-famous for its Port and Madeira fortified wines but the sparkling espumante is also a lovely fresh alternative.