China tours are the perfect introduction to this magnificent country, with highlights including Beijing, home to the Forbidden City, Shanghai with its towering skyscrapers and Xi'an, one of China's oldest cities. A selection of China tours also include a short cruise along the Yangtze river. 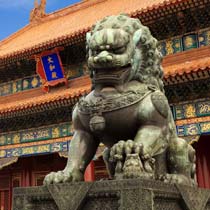 The Great Wall and the palaces of the Forbidden City. The army of Terracotta Warriors at Xi’an.

​View the awe-inspiring Terracotta Army, walk the iconic Great Wall and experience the hustle and bustle of Beijing and Shanghai, two exciting cities which showcase China's prosperity and development as well as its heritage and culture, on this thrilling tour.

Follow in the footsteps of the ancients - up the ornate steps of the Forbidden City and to the ramparts of the Great Wall, snaking its way across the rolling countryside, and through the winding ancient alleys of Beijing's hutongs to learn about Chinese traditions over a home-cooked lunch.

This ‘grand tour’ is an ideal introduction to Asia. You’ll travel to four powerhouse cities - Hong Kong, Kuala Lumpur, Singapore and Bangkok - each with a profound British influence in their history and character.

This 18-day ‘grand tour’ takes in China’s historical highlights: the mighty Great Wall, Beijing’s Forbidden City and the Terracotta Army at Xi’an. There’s also a nod to the country’s natural splendour, with a scenic, three-night cruise along the Yangtze River and a visit to a tea plantation.

Best of China with Yangtze Cruise

Discover the cityscapes of Beijing and Shanghai, Xi'an's Terracotta Warriors and the rare giant pandas of Chengdu on this mesmerising encounter with China, which includes a leisurely cruise along the Yangtze River.

Immerse yourself in the fascinating culture of these East Asian nations. In China, we’ll combine the sights and skyscrapers of Beijing and Shanghai with sleepy water towns and tai chi sessions.

China’s vast size, crowded population and tricky language barrier make it a challenging destination for first time visitors which is why tours are the best way to explore this intriguing country. Marvel at the sparkling skyline of skyscrapers in one of China’s lively cities, explore the ancient imperial palace from the Ming Dynasty and visit a traditional teahouse for a glimpse of daily life on one of our exceptional tours.

China’s many amazing cities are lively and fast-moving with sprawling suburbs and cutting-edge architecture. The shopping outlets are phenomenal and range from world-famous designers to up and coming boutique stores. Each city also has an abundance of eateries including Michelin starred restaurants, ultra-modern sushi bars and street food stalls. In a country where the locals love to eat out, the culinary delights are truly enticing.

Due to China’s huge size, the cuisine varies depending on the geography and culture but you will quickly discover that each dish is just as delicious as the last. Outside of the bustling cities is an incredible landscape offering spectacular scenery including pristine beaches in Hong Kong, the beautiful yellow rapeseed of Wùyuán, the unusual geology of the Danxia rock formations and the many national parks with their flourishing forests and waterfalls.

China is also home to 53 UNESCO World Heritage Sites including 36 cultural sites and 13 natural sites. There is no better way to absorb the magnificence of China’s intriguing history than to explore some of the ancient sites and it seems as if each destination in China has a world of history just waiting to be discovered. Witnessing the different faces of the 2000-year old Terracotta Warriors in Xi’an is an unforgettable experience and hiking along the Great Wall of China is the best way to understand its truly mighty scale.

The many beautiful palaces including the Forbidden City (the world’s largest palace complex) and the Summer Palace with its stunning royal gardens are a joy to explore and the Buddhist temples offer an insight into traditional Chinese culture. If the opportunity arises, it is always great to get off the beaten track and visit some of China’s smaller villages, some of which float on water. It is in these ancient villages that Chinese traditions are still very much alive and the relaxed teahouse culture is admirable.