Vietnam and Cambodia are two deeply spiritual countries connected by the mighty River Mekong. Thriving cities sit alongside traditional rural villages barely touched by tourism. Verdant rice paddies cover the landscape, while revered temples and pagodas dominate the skyline, glistening under the golden sun. Vietnam and Cambodia tours showcase the eclectic mix of culture, history and architecture, and allow you to explore the iconic sights as well as hidden gems off the beaten track. 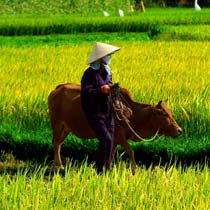 Glimpse past and present on this in-depth encounter with the glittering cityscapes, youthful verve, and centuries-old culture, heritage and traditions of vibrant Ho Chi Minh City and Bangkok.

Visit the major sights of Vietnam and Cambodia, the very essence of Indochina, experiencing their captivating blend of French colonial history, unique local culture and beautiful rural scenery. Overwhelming image retained by visitors to Vietnam is that of a country blessed with an extraordinary beauty.

Discover the heart of Indochina as you explore Vietnam and Cambodia. Your adventure begins in Hanoi, Vietnam’s capital.

Travelling by coach, train and boat, this small-group tour showcases a little bit of everything. You’ll explore bustling cities and visit serene temples.

Visit the major sights of Vietnam and Cambodia, the very essence of Indochina, experiencing their captivating blend of French colonial history, unique local culture and beautiful rural scenery. Overwhelming image retained by visitors to Vietnam is that of a country blessed with an extraordinary beauty.

Vietnam and the Temples of Angkor

Travelling by coach, train and boat, this small-group tour showcases a little bit of everything. You’ll explore bustling cities and visit serene temples.

Images of Vietnam, Cambodia and Laos

Dive into Indochina with this comprehensive 3-week tour. In Vietnam, you’ll journey from Hanoi in the north to Ho Chi Minh City in the south, stopping at the likes of Halong Bay, Hue and Danang along the way.

The peace and tranquillity of UNESCO-listed Halong Bay with its stunning limestone formations and secluded islets, is a far cry from the hustle and bustle of Ho Chi Minh City and Hanoi. UNESCO-listed sights, dynamic cities and rural villages combine to create two exciting countries, best explored on a touring holiday.

Vietnam and Cambodia both harbour troubled pasts but have since thrived and opened their doors to the world. Vietnam was ruled by powerful dynasties before being colonised by France, then occupied by Japan. The Americans were the last to leave their mark on the country. Poignant reminders of Vietnam’s turbulent past remain, including the infamous Cu Chi Tunnels, a network of underground tunnels used during the Vietnam War. The French influence is still evident in Ho Chi Minh City, formerly Saigon, as magnificent French colonial buildings line the streets.

Cambodia’s ancient name, Kambuja, means “Land of Peace and Prosperity”. However, the country experienced no peace under the brutal Khmer Rouge. The regime, led by Pol Pot, was responsible for one of the most horrific mass killings of the 20th century. The Killing Fields on the outskirts of Phnom Penh are a haunting reminder of this four-year period.

Buddhism is the main religion in Vietnam and Cambodia. Monks adorned in orange robes enter the shimmering pagodas and ornate temples that these countries have to offer. In Vietnam, the seven-story Thien Mu Pagoda guards the historic capital of Hue, while the Cao Dai temple near Ho Chi Minh City is a multi-coloured masterpiece.

The Bai Dinh Pagoda, set against a backdrop of majestic mountains, houses hundreds of beautiful carved Buddha statues including a spectacular bronze one. Cambodia also has its fair share of revered sites, the most famous being UNESCO-listed Angkor Wat, the largest religious monument in the world. Built by King Suryavarman, it has been an important place of worship since the 12th century.

Highlights of Vietnam and Cambodia