Our fantastic collection of Japan tours combine spectacular sights, rich culture and delicious Japanese cuisine. Japan mixes modern and traditional highlights with the soaring towers in Tokyo and Kyoto's ancient Buddhist temples. Admire the spectacular backdrop around Mount Fuji and reflect on Hiroshima's past in the heart of the city, which focusses on peace and tranquillity. 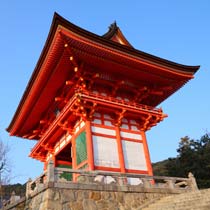 Immerse yourself in Japanese culture on this cruise-and-stay holiday. Quintessentially Japanese experiences and delicious cuisine await you - sample sake, sushi and soba, and sip tea made meticulously during a traditional ritual.

A tale of three iconic cities and three former capitals - your epic journey through Japan blends old and new, with soul-stirring visits to ancient centres and modern cities.

Immerse yourself in the fascinating culture of these East Asian nations. In China, we’ll combine the sights and skyscrapers of Beijing and Shanghai with sleepy water towns and tai chi sessions.

​​From the natural beauty of Mount Fuji to the spectacular skyline of Tokyo, enigmatic Japan offers a unique holiday experience. Discover ancient temples, enjoy a traditional tea ceremony and travel on the famous Bullet Train as you explore this country of contrasts.

Allure of Japan with Snow Monkeys

Japan and South Korea in Focus

Japan is renowned for its seasonal attractions; in spring delicate cherry blossom, one of the best-loved symbols of Japan, sweeps dramatically across the country whilst fairytale wisteria gardens create a floral extravaganza. Japan’s gardens are particularly beautiful in summer colourful lotus flowers, hydrangeas and irises set against a backdrop of lush greenery.

Some of the biggest and best festivals take place in summer, from spectacular fire festivals and colourful firework displays to traditional lantern festivals. In autumn red, orange and gold maple and gingko trees create an amazing display, with parks and gardens holding special light-up events to illuminate the stunning foliage. During winter in the north of Japan you can bathe in natural hot springs whilst being surrounded by snow, and the mountain regions turn into world-class ski slopes.

Japan tours explore the country’s unique culture which dates back thousands of years and is steeped in tradition. From the distinctive white face, red lips and elaborate hairstyle of the Geisha to the fierce warrior ways of the samurai, ancient traditions still thrive in modern Japan. Sumo dates back over 1,500 years and was originally a form of Shinto ritual which has developed into a popular professional sport, whilst the martial arts of karate, kendo and judo have been practised for hundreds of years. The Japanese tea ceremony is a long-standing tradition; this meticulously-choreographed ritual is a spiritual process as well as a way of preparing and serving green tea.